“Coffee mask” is a cabinet for living room use which is entirely made of handcrafted particularly colourful Amazonian woods with inserts of photographical images, acrylic and Japanese paper. Being an important furniture piece it refers as well to a significant historical issue of the city of San Paulo where this piece has been created during our Artist-in-Residence program: The coffee cultivation. 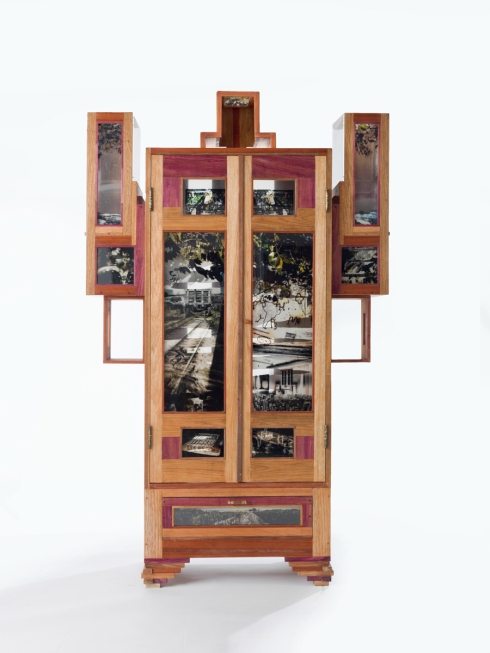 Coffee was the main reason for the cities impressive growth from 1850 and especially at the end of the 19th century. Therefore, the cabinet reveals through images many signs which are related to the coffee like coffee plantations, antique objects and typical coffee filter, country life versus city life with its skyscrapers and the cutting-edge penthouse on the top of the first skyscraper made of reinforced concrete in South America called the Martinelli building – built by one of the main precursors of the coffee “boom” in the beginning of the 20th century. Many more references can be found, for example stamps of European immigrants who arrived at the port of Santos as well as invitation letters from the Hostelry in San Paulo, brand marks of slaves, Japanese playing cards used during train journeys, the outstanding infrastructure like railways, locomotives and steamships, details of the first train stations in San Paulo and the ocean where everybody needed to cross … This piece is intended to be discovered from all sides and through several visual layers!

The wooden openings in the front part of the cabinet form a stylized mask which was inspired by the Walù mask, a mythical antelope mask still used for rituals related to soil practiced by the Dogon people in Mali. During the centuries of slavery which ended officially in 1888 many West Africans arrived in the new land – who contributed like the indigenous inhabitants as well as the huge amount of foreign nationalities to the at least 140 terms of skin colour shades. Definitely a very narrative and anthropological piece!

The just contrast tables belong to a series that begun with the idea of combining differences in a very evident way. The question of contrasts in everyday life are becoming more and more important and we are all exposed to it whether we like it or not. So why not explore it.

As we are all made of one material, this physical manifestation of contrasts also needed to be made with one material. We chose wood, a living material. The singularity of each piece lies in unifying, not combining, variations in colour and breadth of the same material.

In order to accomplish this the design needed to be as simple as possible in its form and lines. As it is only through simplicity that we can show the difficulty of putting differences in the same material together. This metaphorical collection is both deconstructive and constructive at the same time. 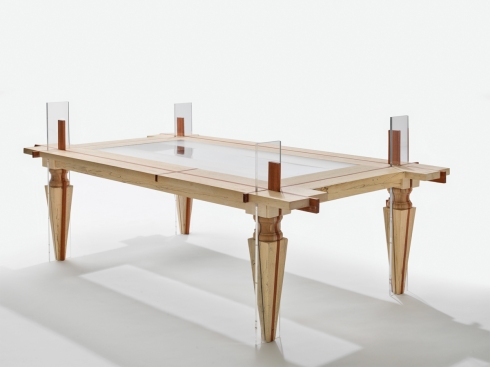 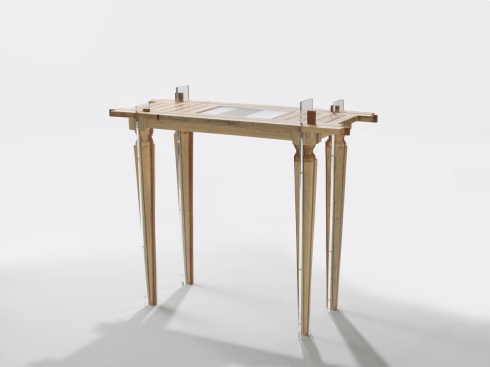 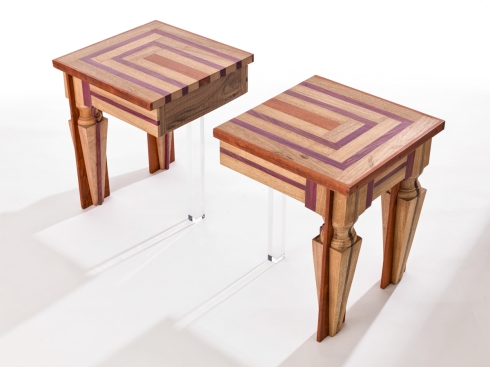 The mosaiced coffee-table “cobogó” is made of two Brazilian woods Muiracatiara and Freijo, resin and acrylic.

The shape of the 16 table legs made of transparent acrylic recall the palafitts of Amazon river houses which were raised on piles to protect them against flooding. They were most likely an indigenous creation by the Amerindians in pre-Columbian times. The centre of the table top reveals a composition made of colourful mosaic tiles that refer to a very important element of Brazilian culture, architecture and design, the so-called ‘cobogó’. 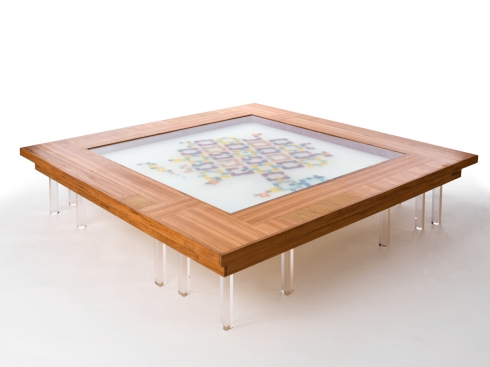 Cobogó is a regional word and invention patented by three engineers in Recife in the Twenties. It is a three-dimensional perforated element made of concrete used to separate spaces but without sealing them completely. The function of the ‘cobogó’ was to protect against the hot Brazilian sun whilst allowing some privacy and the wind to blow through. As the light was filtered in an interesting way it started to be considered not only as functional but also as aesthetically pleasing and nowadays in San Paulo you see ‘cobogós’ everywhere. Whilst observing this relative of Portuguese tiles, which take their origins from the Arabic world, we noticed patterns that repeated quite often. Some of them seemed to be universal ancient symbols .

Indeed some of these symbols are identical to the letters of the tupi-guarani alphabet of the Marajoara culture – a pre-Columbian complex society that flourished on the Marajó island at the mouth of the Amazon River. The Marajó culture belongs to the Tupi people who inhabited almost all of Brazil’s coast when the Portuguese first arrived there. The Tupi people were one of the most important indigenous peoples in Brazil who left a strong mark on the Portuguese language of Brazil. Tupi has given Brazilian Portuguese not only many thousands of words and multiple names of locations but also its strong nasal sound.

The mosaiced side-table stool “marajoara in cobogó” finds its inspiration in the element ‘water’, in particular in the Pre-Columbian Marajoara culture, as well as in an element of Brazilian architecture – the so-called ‘cobogó’.

The concept and transperancy permits a new way of using this restored Brazilian stool coming from the 50’s which makes it even more unique.

Colourful Amazonian woods were added and both the top and the stool legs are lightened through the use of transparent acrylic. The coloured mosaics above, which are immersed in resin, show a symbol taken from the Tupi-Guarani alphabet of the Marajoara culture – a pre-Columbian complex society that flourished on the Marajó island at the mouth of the Amazon River. This symbol can be found also in Brazilian architecture in form of ‘cobogó’ – a regional word and invention which function is to protect against hot Brazilian sun whilst allowing some privacy and the wind to blow through.

This small mosaiced side-table stool is intended for livingroom or bedroom use. 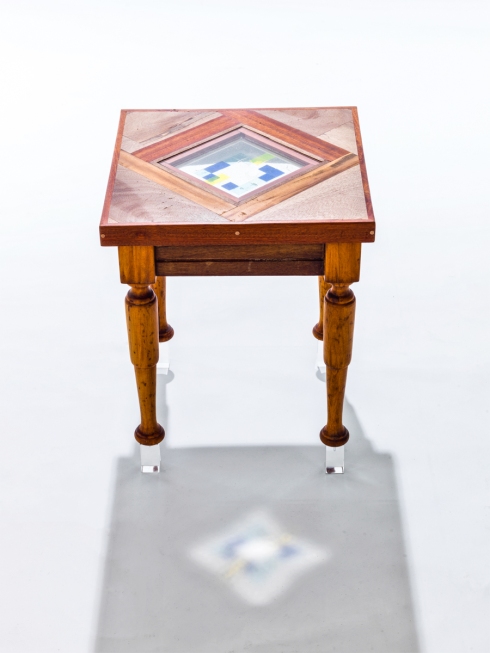 This series explores the color and its uniqueness when it reacts with transparencies like resin. The result of colorful shades, which cannot be repeated in the same way, is combined with wood treated in natural way maintaining antique furniture proportions. This liquid coloured bench called “marajo’s reflected sky” (Carina & Puppis) was created during our Artist-in-Residence program in San Paulo.

During our stay in this megalopolis we did not see so many stars in the night sky which we missed. The city sky invites you to go out and to discover the amazing nature of this fertile country. So why not dreaming? Dreaming of an open night sky. How must it have been living under the sky like the pre-Columbian Marajoara on the Marajo’ Island – the largest fluvial island in the world? 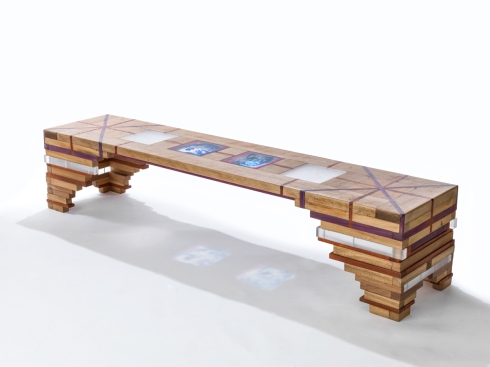 The bench celebrates the cosmology of the Marajoara culture by combining stepped pyramids in form of the bench legs – a geometric pattern found in repetition in their pottery art – with symbols of their alphabet through wooden inserts in the sitting, bright shades evoking heaven and water through transparent coloured resin and two constellations pointed out through phosphorescent pigments which can be seen only from the southern sky: Carina and Puppis . These two constellations were once part of one large constellation called Argo Navis but due to its enormous size the Ship does not exist anymore as a single constellation as it has been divided into three constellations. The third constellation is called Vela and can be found in the coloured blooming skyline lamp “Vela”.

Hence, we imagine the Marajoara people laying on the sand while listening to the waves and watching an enormous ship in the sky.

The up]side[down table “arche-typal San Paulo”, which was produced during our residence in San Paulo, is made of handcrafted Amazonian woods and acrylic. As the name suggests, some elements can be turned the other way round or up, or inside out.

The table top stands proudly on two table legs similar to plinths or pillars evoking the image of an altar. Roughly 400 years ago rustic two-legged dining tables were typically narrow long and used by monks who ate tightly squeezed in a row. During the centuries there were many variations of these monks dining tables. This up]side[down table has a pyramidal trunk – typical of the 18th century – a chunky version of the Louis XVI style.

The table on first sight gives an impression of rigidity and seriousness, however under closer inspection it is clearly playful. The alternated transparencies in between of colorful wood reflect and lighten the whole structure. The ancient pyramidal form inspired by the step construction of the pillars led to the insertion of images dedicated to ancient forms in architecture.

In San Paulo we discovered modern architectural constructions coming from ancient lost cultures in the Ibirapuera park – the park is a city’s symbol itself – which we reveal in three pictures on the table top: The indigenous form of the Oca Pavilion which’s name and shape resembles the traditional Native American dwelling, then the Auditorium which’s architecture is made of a trapezoid and, in section, of a triangle reminding ancient pyramidal constructions and finally the Obelisk having origins in the ancient Egyptian culture.

Two of the three transparent boxes through which the pictures can be observed are reversible. By turning them around they become a receptacles – able to contain objects of everyday life. Switching them around again the “openings” level off the surface of the tabletop.